Xinet® WebNative® Suite Versioning manages the process of creating and storing multiple versions of any file while controlling user access.

Whether you have many users accessing the same file, or one user creating multiple copies of a document, having a simple, automatic method to manage document versions eliminates the confusion caused by saving several copies of the same document to the server. Xinet Versioning offers version control for files that utilize XMP metadata—ensuring that the correct version of every document is stored in the proper location and accessible to authorized users when they need it.

With this feature, every time an authorized user saves a file that is managed through Versioning, a new version is automatically created and designated as the “working” version of the file. The working version can be accessed on the WebNative Suite server from anywhere in the world; and with a working version in place, all previous, non-working versions are made inaccessible so they won’t be used by mistake. 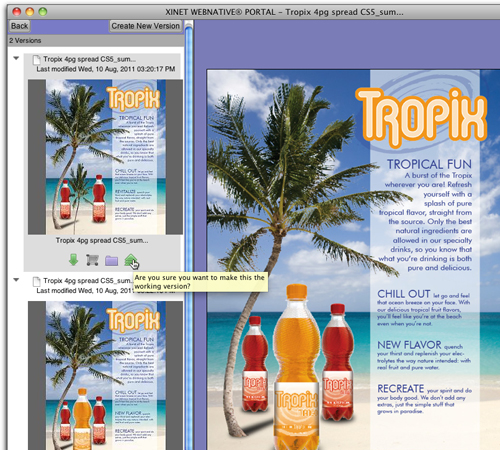 Preview and Promote Versions: Any version of a file can be previewed and
promoted to the working version by an authorized user.

The ability to save and manage versions of a file also provides extensive records for audits and forensic review. Even after a job is archived, previews of the various versions are available. In addition, the system maintains logs with time-stamps indicating when and by whom each new version is created.

Managed at the administrative level through our Triggers and Actions tool, this feature automatically saves versions of in-process documents without overwriting original files. It eliminates the need for complicated file naming conventions and lets you control who can access working files and the many versions associated with them—with simple, intuitive administrative setup.

Versioning functionality can be restricted to specific areas of the server and lets you establish a maximum number of versions that can be saved per file.

Versions can be triggered for any file based on:
Controlled version management saves time in the workflow and eliminates the possibility that an incorrect file will be used by making the right files accessible to the right people. You set the parameters for automatic versioning—and WebNative Suite does the rest.